Sometimes somewhat at random I will pick a recipe from the internet (how random is based on whether or not I have the ingredients necessary to make the dish). The other weekend I decided that I wanted to make homemade Belgian waffles, this sounded like a great idea. I had seen it done before! So I started mixing and prepping only to discover my milk had gone sour. Not a little sour, VERY sour. I think it took me 2 hours to get that taste out of my mouth (don’t worry, I figured it out before I actually made waffles out of it – now wouldn’t THAT have been a surprise).

I usually make waffles using a mix that comes in “homemade” looking box, so I figure that is just about as good as cooking homemade right?

This weekend I was determined… fresh milk in hand… to make some Belgian waffles. I picked this Taste of Home Belgian Waffle Recipe to try out. I was going to try a yeast kind but this one sounded good. I figured out why once I melted an entire cup of butter to add to the mix. That and 3/4 cups of sugar. So, the recipe doesn’t state that you should bring the milk to room temperature before you mix it, but luckily I caught that in the comments before I ventured into creating lumpy butter.

The verdict, wow, homemade belgian waffles with a lot of butter are definitely tasty, but I think half my bowls got dirty in the process (I believe I counted eight) of making the homemade Belgian waffles (this may be why I am not much of a baker). They are really sweet and would probably make a good dessert waffle, you almost don’t need syrup on these guys. My husband loved them and ate extra waffles toasted in the toaster as a snack later on.

Self portrait of what my hair looks like after making homemade Belgian waffles.

I may dare to do it again, but when I went grocery shopping this week I bought Belgian waffle mix. Don’t judge. 🙂. 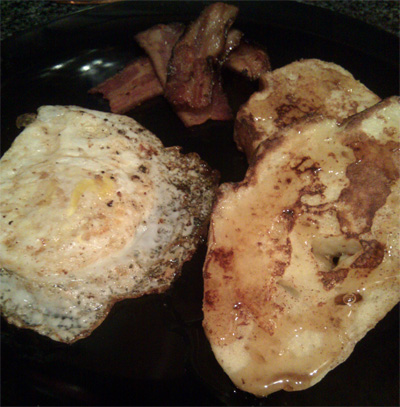